Okay, I like Digg... I guess you could say I dig Digg, mostly because I can often find stuff that's kind of interesting while only wading through 90% crap instead of 99.9%, but there's a certain point where one just has to give up on thinking that any type of aggregator, whether user-driven or automated by some crazy algorithm, is responsible for some sort of journalistic integrity.  I really couldn't care less whether I ever get an article on the front page of Digg or not.  Sure, I've sent in a couple of things in fits of boredom, but linking people to an article with an accompanying blurb isn't reporting or publishing or being creative.  In fact, me getting my ya-yas out rambling and ranting about things I love and hate barely meets that threshold (but it helps keep the cobwebs out).  If submitting a link to Digg becomes anything more than a hobby and studying back issues of the New York Post to come up with the perfectly crafted, yet scandalous headline becomes a second job - take a critical look at yourself in the mirror, then go lie down and listen to Timewind by Klaus Schulze. People are sending open letters to Kevin Rose about how Digg's algorithm is somehow part of some vast conspiracy to shut certain people out.  Guess what? If I send a letter to the New York Times, they don't have to publish it. In the same way, Digg doesn't have to "front page" anything it doesn't want to.  The Dark Tipper came up with a great idea to make money on the web, and he's doing just that.  Digg is not an autonomous collective where anyone and everyone gets a say about everything.  Sure, you'll get to vote on things, but face it folks, Digg is a business.  If they can generate a front page that will drive more banner ad pops, that's what they're going to do. More power to them. If you don't like it, code your own social news aggregator. I know this isn't a new phenomenon.  Our ancestors were bickering about media gatekeepers back to when fights broke out over who got the biggest piece of charred driftwood to draw on the best-lit section of the cave wall.  Why should Digg be any different than any radio or television station that you don't like? If you think the Digg algorithm is conspiratorial, delete your bookmark and spend your time in a more noble pursuit: finding any mass medium that is unbiased.  When it comes to obsession over expected integrity of Digg or mass media in general... HATE 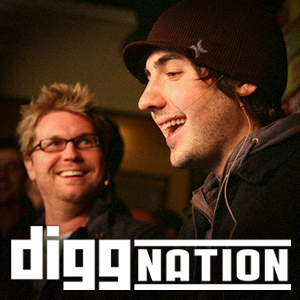