This is truly a love/hate topic for me. There is a lot to love about the 99 cent/song download that has become industry standard.  To be honest, I loved the days of allofmp3's cent/mb downloads better, but we all knew that was shady even though technically legal.  The 99 cent download is a panacea to those who love pop radio and prefer the bits & bytes, song by song approach to music. With the click of a button and a quick sync command, you can be listening to that one hit wonder over and over again.  I suppose the single song approach to music purchases can be one way to expose people to a band or artist they would never shell out $10-15 for in buying a full CD.  The single song download has also redefined the release methodology for artists, or course this was forced on them by monopolistic music conglomerates who would sit on a band's recording for sometimes years at a time until they felt it was right for release: ask Fiona Apple whose Extraordinary Machine CD was shelved indefinitely because the execs couldn't find a "hit" on it. Now labels and artists promote direct-to-download releases between CDs in a seeming way to generate funds for recording and keeping artists on the map. From a pure market standpoint it's difficult to argue with the 99 cent download as there is no reason I should have to pay for music I don't want. There's many an artist who can, for one brief shining moment, find a glimpse of genius only to destroy that vision with the remainder tracks on a CD. For the advocates of choice and pop radio lovers everywhere, I love the 99 cent download. On the other hand the iTunes revolution and the 99 cent download have contributed, in many ways, to the destruction of the artistic sensibility of music that existed, at least in some form until about five years ago.  While I grew up in a time of escapism into a gatefold LP cover that often stood on its own as visual art, I had, begrudgingly sacrificed that childhood fixation when compact discs became standard.  What I am less willing to sacrifice, however, is the idea that songs should be able to be so easily plucked from the entire collection that is an album or cd. Even to cite a relatively recent example, Radiohead's seminal OK Computer should not be listened to piecemeal.  Sure there were dozens of albums back in the 70s that explored conceptual themes that ranged beyond a single songs and, while many of them still had radio hits, the entire collection was always more satisfying: I find little pleasure in listening to Pink Floyd's Comfortably Numb without the rest of The Wall surrounding it, or The Real Me without Quadrophenia, or anything from side two (remember sides) of The Beatles' Abbey Road without the songs accompanying them. Yeah I know, I'm dating myself, but just as it is deplorable to only pay for one scene of Hamlet or one-sixteenth of a Guernica print, there is something disingenuous of forcing artists to stop thinking of song collections as important because we only care about one song. For this reason, I hate the 99 cent download. 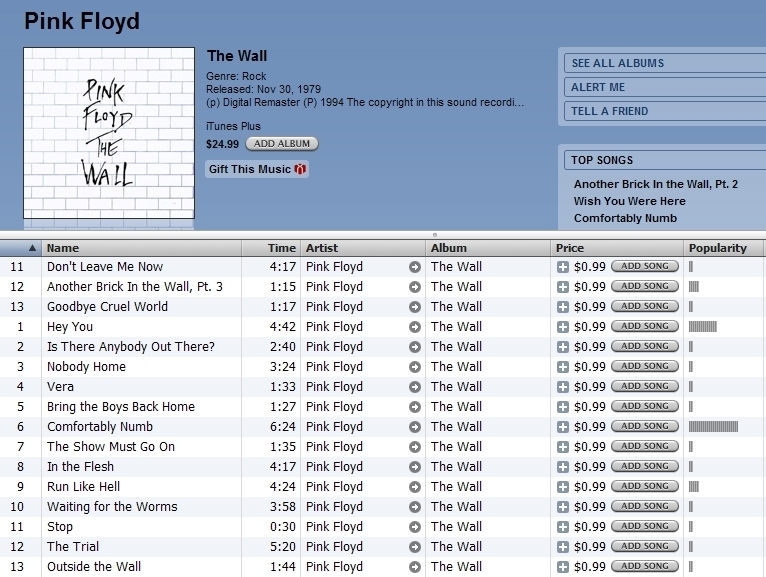