Two of the greatest toys I ever had growing up was the Nerf Football and Nerf Soccerball. Both spongy projectiles were safe enough to use inside against a wall. Of course they were dangerous to lamps and statues alike, but they allowed for a certain freedom that was important to young Canadian children who were often denied flat outdoor surfaces in the winter to hoof such spherical objects.
There was, at that time, a simplicity with Nerf. Not only in the name, but in the product selection. It was about sports and the ability to get hit in the face with a ball without splitting your lip or losing teeth. Part of this level of innocence came with the fact that every kid knew what Nerf was. They made sponge sport balls, and that was good enough for everyone... everyone that is, except for Hasbro.
In 1970, Parker Brothers released the simply named "Nerf Ball". That's it. Simple, elegant, 4 inches of sponge that sold 4 million units. When they expanded to the Nerf footballs and soccerballs and Nerfoops, all seemed a logical extensions. Through various acquisitions by Kenner, Tonka, and now Hasbro, Nerf has become part of the global military-industrial complex destined to drive our children in lives being destructive war machines.
I offer up the following evidence: 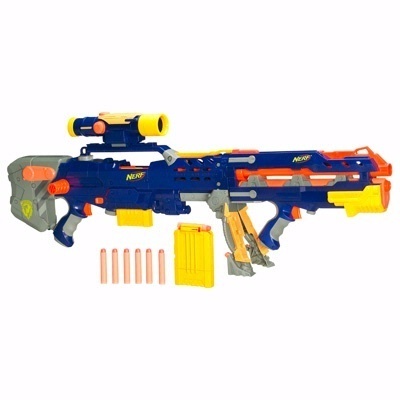 N-STRIKE LONGSHOT CS-6
Where To Buy Print Take your blasting skills to the extreme with this two-in-one blaster! This blaster is more than three feet long and can launch arrows up to 35 feet away! Aim with accuracy and precision using the targeting scope. Two quick-reload clips hold a total of 12 STREAMLINE DARTS. There's even a fold-down bi-pod to help you steady your aim for important shots. Looking for a quick shot at close range? The blaster has removable parts to give you one-handed freedom with a single-shot blaster! In either mode, load up, aim, press the trigger and watch the darts go the distance! 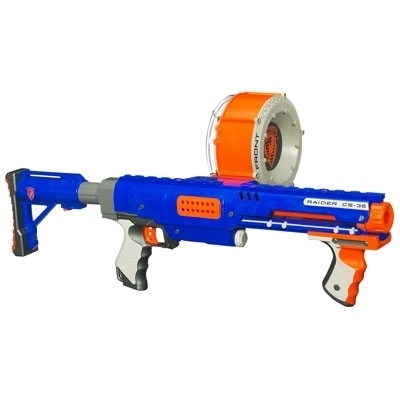 N-STRIKE RAIDER RAPID FIRE CS-35
Assess the situation and be ready to strike against your opponents! The RAIDER RAPID FIRE CS-35 blaster is the ultimate for any battle! The pump-action handle give you total control of our rate of fire, and the drum magazine holds 35 Clip-System darts, giving you massive ammo capacity. A clear window lets you see how much ammo you have left! Two blasting modes give you defensive flexibility  use the slam fire mode for multishots or the slide mode for single shots! This is the pinnacle of blaster performance! Blaster comes with drum magazine, 35 Clip-System darts, and stock. 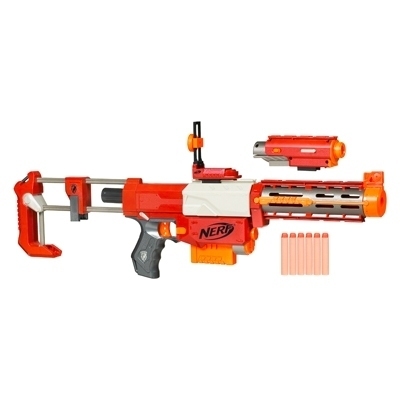 N-STRIKE RECON CS-6
Build your own blaster with five interchangeable parts that you can take apart and reassemble any way you want. Snap the parts in any configuration onto the TACTICAL RAIL, and gain the upper hand in any situation that calls for awesome  action. Other features include a flip-up sight for aiming precision, a barrel extension and a dual-mode light beam with red-dot accuracy that's perfect for night missions! Use the shoulder stock to steady your shot and store an extra clip of ammo. 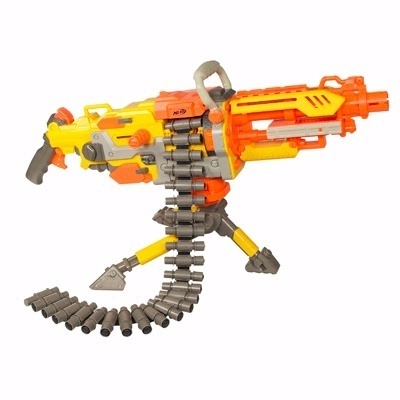 N-STRIKE VULCAN EBF-25
Complete your N-STRIKE arsenal and prepare for the ultimate in battery-powered blasting! Be ready for any battle with the N-STRIKE VULCAN EBF-25 blaster - an awesome, fully automatic cannon! Load the blaster and fire at a rate of up to three shots per second! Watch as the belt feeds automatically through the blaster, letting the barrage of firepower continue as you battle your opponent. The piston-powered internal launching system makes it an unstoppable force! Switch to single-shot mode for precision blasting. The removable tripod folds for easy transport -- or a quick escape from enemy fire! Even your toughest opponent won't know what hit him when you unleash the power of the N-STRIKE VULCAN EBF-25 blaster!
What the fuck!?!
Even my beloved Nerf football now looks like a missle or bomb to launch at enemy territory, and apparently sound like one too. 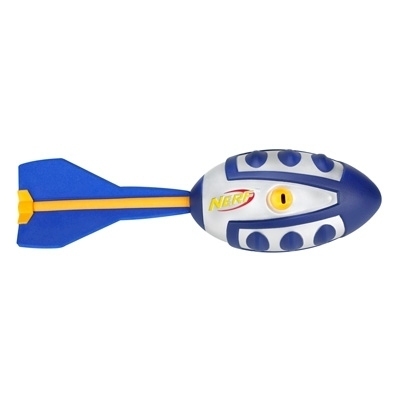 VORTEX MEGA HOWLER Football
The VORTEX MEGA HOWLER football gives you the ultimate football experience with awesome performance and a cool whistling sound like no other football! Go long and see how far you can throw it! Football howls with whistling action as it spirals through the air!
Why do I envision turf wars starting up between five year olds and their Nerf accessories. We'll have a six year old General planning the Tet Offensive while four year olds cower in their foxholes on the front line. Isn't a simple four inch sponge sphere enough.
I remember a time when all Lego had four corners, Monopoly only took place in Atlantic City, and the only game I could play on my TV was Pong. Now, I'm not saying that advancement is bad, but was this the only logical evolution of Nerf? I don't remember Slime becoming Bio-Chem Slime Toxic Warfare. I don't remember Jacks developing sharpened spikes that could be thrown at intruders. I don't remember Simon being electric-charged to shock and torture player who couldn't recall the correct light sequence. Nerf went the way of weaponry, and I just don't get it.
Maybe I'm just old... I need to go find a Space Invaders game and shoot me some aliens.