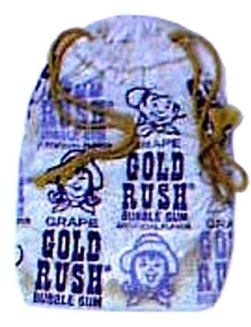 Every kid likes candy. If you didn't like candy, it's because you lost your taste buds in a horrible smelting accident. I remember growing up with candy type that I just can't find anymore, or, if they are around, they don't seem as cool as they used to be. Now I'm not talking chocolate bars here; that's its own special category. I'm talking compressed, molded sugar of various artificial flavors.
Gold Rush Gum
The packaging is what made this gum desirable. If memory serves, the gum was crap. But what kid wouldn't love a cool little candy bag with a drawstring to keep when the were done. P erhaps this same design ploy was attached to Crown Royal as I got older.

Koo Koo
This Neopolitan Choco-Vanilla-Strawberry striped taffy was all the rage for a short time and was visually appealing because for the same price as a package of smaller candy, the surface area alone would draw you in. The taffy was about what you'd expect in a mashed down strip wherein the "flavors" really didn't taste to different from each other. I, in fact, once rolled up the taffy into a ball to prove to a friend there really wasn't a tremendous value in this landing strip confection. Now that was a helluva taffy ball chew to get through. 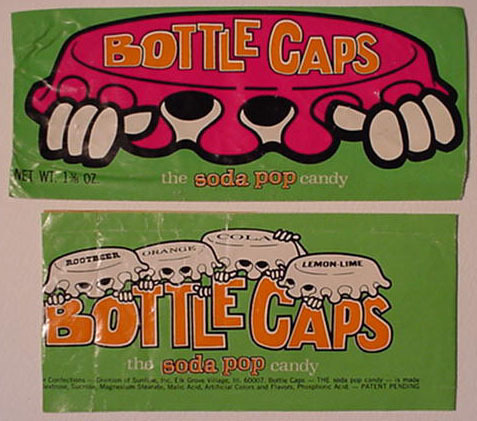 Bottle Caps
Bottle Caps were absolutely awesome! Here was a candy, shaped like bottle caps, that actually had a lingering taste of the pop they were supposed to represent. I can imagine the marketing wizards sitting around a table coming up with these: "Here's an idea! Let's pack some solid sugar together to taste like liquid sugar!" If parents tell their kids not to drink too much pop, they can enjoy Bottle Caps instead. 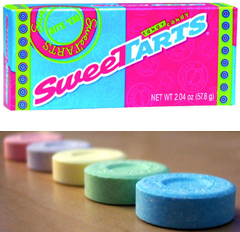 Sweet Tarts
Not much deception in the name here. They were sweet. They were tart. They were different colors, but the colors seemed inconsequential. You would inevitably be enjoying the sweet flavor with mild amount of sour along the way until you got down to where you bit the candy. Then it was all over. You could rarely stop from making the "sour" face as the powdered explosion hit your taste buds. Happy times! 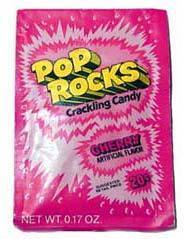 Pop Rocks
Still legendary. The source of many a mythological horror story about the kid who put 8 packs of Pop Rocks in his mouth and drank a can of Coke. It was kin d of like the candy version of Bloody Mary. In fact, the myth went so far as to claim it cost the life of Life Cereal spokeskid Mikey: "His head blew up! Hey Mikey!" The taste was meaningless. Pop Rocks were the Mexican Jumping Beans of your mouth. How much cooler could it get? 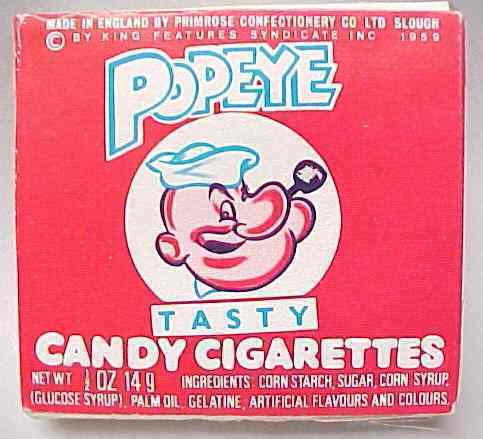 Popeye Candy Cigarettes
Screw health and political correct candy. If I was too scared to get caught smoking, I certainly wasn't too scared to pretend I was with candy cigarettes. The sad thing is they forced a name change to "candy sticks". Really? Did they honestly that candy sticks shilled by the ugliest sailor on the high seas was going to be a "gateway" snack to a nicotine fix. I mean, it's not like the character had ever been used before to shill something equally distasteful like vegetables or something... wait... never mind. Forget about smoking. The candy itself probably had more damaging substances than the average cigarette. Check out the ingredients on that package: corn starch, sugar, corn syrup, palm oil, gelatine, artificial flavors and colors... REALLY? ARTIFICIAL? Who would've guessed this wouldn't have the all natural tastes of tar and tobacco?
Hubba Bubba
Yeah, Bubblicious was cool as well, but Hubba Bubba had a name that rhymed, and for a single-digit aged kid, that's all it took. The bubble were no-stick as well. In as much as I loved Double Bubble and the enclosed comic strips growing up, Hubba Bubba was that next-gen late 70's breakthrough of square gum that burst on the scene with a bunch of groovy commercials.
Starburst Fruit Chews
Alright, I know that any candy that has fruit in the name should never pass a kid's lips, but that was the ploy of the name. By putting the word "fruit" in it, not only could you tell your parents you ate fruit with lunch, but you could also live under the illusion that your logic in convincing them that the "real" fruit in the flavoring MUST be healthy for you. 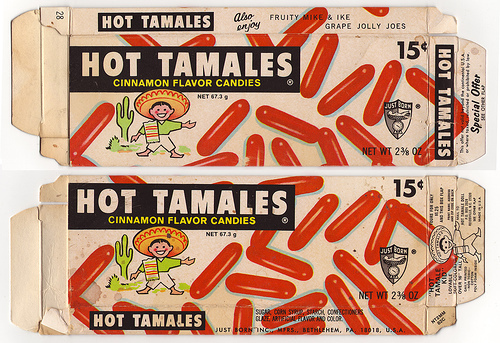 "Capsule" Candy
This is more of a category wrap up than an individual candy. The pill-like confections in boxes like Mike and Ike's, Goodies, Good & Plenty, and Hot Tamales were much more of a threat than Popeye cigarettes. These "pills" allowed you to "be like mom" in popping your candy valium or Contact C for the day. Lookie like every "diet pill" that was ever made, in many of the same colors, it's a small wonder these were allowed to live on. Maybe if they called them Betty Boop's Secret Pill Stash Candy, they would've been outlawed.
Life Savers
We had a Life Saver factory in my hometown of Hamilton, Ontario. The Life Saver Christmas Book, containing ten rolls, was the most popular gift during the in-class gift exchange growing up... although 8 year-olds have a hard time getting past Butter Rum. Life Savers crossed over in pop culture in a huge way when the inspirational "Have a Life Saver, maybe it'll make you feel better" was used as one of the greatest punchlines on Happy Days. Wayda go Mr. C!