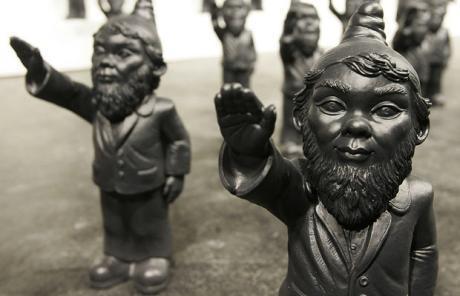 Okay, I really just wanted to use the word "portend", but since I've started anyway, I'll continue...
In reading a recent story of an art installation of a group of Nazi saluting garden gnomes lined up like Terracotta warriors, I felt inspired to half-heartedly ponder some ethical questions surrounding the world of lawn ornaments. After all, aren't all lawn ornament really just "art installations" by the homeowner?
When some citizens and politicians decided to get behind a movement to remove the installation, prosecutors argued that while "Hitler salutes and Nazi symbols have been illegal in Germany since the end of World War II... they were allowed if they were used clearly to counter national socialist ideology."
The basic argument promotes the idea that because they're tiny, bearded, and have wacky hats, the "Gnazis" must be a parody. Now if being slight of stature, having facial hair, or having your head bedecked like a Deadhead at a used record store, means that you are automatically a source of "parody" when matched with a gesture, there are surely going to be some lobby groups that will want to have a say on this. The Leipzig Little People for Politically Correct Lawn Ornamentation, the Bearded Brewchuggers of Berlin, and Local 2468 of the International Brotherhood of Haberdashers, will have to line up their representatives to address the National Subcommittee for Lawn Beautification and Grass Seed Regulation.

If an odd juxtaposition implies parody, what does that say for the millions of pre-pubescent cherub boys pissing in fountains on lawns all over the world? Did the creator of the sculpture want to draw our attention to the fact that our reaction would be very different if it was a life-sized John Holmes taking a leak in a golden chalice?

I suppose a lawn nativity scene during the holidays must be instant parody. After all, none of these biblical characters, in their supposed setting, could have logically been white, so the sculpture must be the artist's effort to convey a sense of western culture has perverted the true tenets of the Catholic faith.

I don't even know what the frak to make of a winged dog, but perhaps the artist is trying to point out a "jump the shark" moment in Superman lore when Krypto the Superdog joined the man of steel. Either that, or the person casting the mold was smoking up with the aforementioned record store Deadhead just before heading into work.
Does this decision by the German courts mean that all of the people I have been vilifying over the past decade for racially-insensitive lawn jockeys can now claim that it's "parody" or "satire" and only meant to expose the flaws in our racially-charged culture?
I think that if I get a lawn ornament, I'm going with the "Raise the Roof" Buddha pictured below. I'm not a Buddhist, but I'd simply like everyone to get a chuckle when they walk by and say, "Oh, look honey, that fat Asian man is holding up nothing. That's much more deep than the Atlas statue at the Hendersons."