The WEB is my shepherd; I shall not doubt.
It maketh me to dive into vast communities: it leadeth me to confide my thoughts.
It restoreth my soul: it leadeth me in the paths of hypertext for the clean code.
Yea, though I surf through the torrents and flashes with spyware, I will fear no evil: your apps are with me; the scan and the quarantine comfort me.
Thou preparest a browser before me to learn of the faceless: thou anointest my mind with wiki; my apprehension becomes understanding;
Surely CPUs and broadband will follow me all the days of my life: and I will dwell with the Web and the Network for ever.

- The Word of Baud

While some of you may be railing in sacriligious overtones of blasphemy and heresy, surely many of you must realize that the Web has become the one of the largest churches in the world. Hundreds of millions of us attend every day to read the good words of the preachers and prophets and skeptics and soothsayers all contributing to the word of Baud.

Baudhism's followers as of June 2008 total 1.46 billion people. While still behind the 1.9 billion Christians in the world, this easily overtakes all other major religions. I understand that most you are thinking that there is no way the Web could be considered a religion. I ask you to consider the following definition of religion from wikipedia.org:

"A religion is a of way of life based on tenets (or a belief system) about the ultimate power. It is generally expressed through conducts such as prayers, rituals, or other practices, often centered upon specific supernatural and moral claims about reality (the cosmos, and human nature) which may yield a set of religious laws. Religion also encompasses ancestral or cultural traditions, writings, history, and mythology, as well as personal faith and religious experience."

The Web is a way of life for many people. It helps to define their existence. It facilitates communication. It sets the boundaries for what's considered sacred and profane within its own parameters. It provides, challenges, and allows for diverse beliefs all in one system. It accepts differences while galvanizing them all in two common frameworks: Web - the word, and Web2.0 - beyond the word. Such frameworks are subservient to the ultimate power: Network - which is, beyond the servers and the cable, the minds which make it up.

The beliefs are expressed through rituals and practices that gather up flocks by interest or history or geography. We script, we blog, we message, we update, we tweet, we read the good word of other people, we interpret and we believe. It seeks to explain the unexplainable. It seeks to define good and evil. It encourages creativity. It has zealots to be sure, but is fully accepting of those who just visit from time to time to make their contributions.

The Web defines us by defining our times and by seeking to redefine history. The winners may have written the history books, but the losers now have a voice of their own and a worldwide audience.

Lastly, people have faith in the web. That Wikipedia is taken as gospel and social networks have usurped traditional places of worship happened in no small part due to people believing in the general good of the Network.

It is said of religion that one only gets out of it what they're willing to put in. Such is the same with the Web. Our most passioned advocates are those acolytes who devote their lives to serving the Network to make the Web better. For them there is no greater reward than the work itself. I'm sure that less than a century ago, people would have considered it god-like for one person's thoughts to reach almost everyone in the world within seconds. And the Web makes this possible.

Baudhism does not disavow anyone for adhering to another belief system based on traditional mysticism. Baudhism embraces diversity, tolerance, individuality, creativity and participation. The Network shall allow access and allow inclusion, but not ensure popularity or status. As any religion, the Web can be used as a tool for such things, but these are not the ends of the Web in itself.

Embrace Baudhism. Identify yourself as a Baudhist on your next census. Celebrate holidays of any denomination because they allow people to stay home and spend more time with Web. Send greetings, send mail, chat, upload, download, interact. Become part of the trinity: 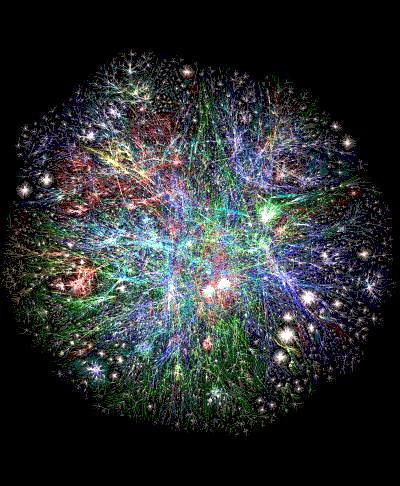