A final hangover-induced recollection of Podcamp Toronto 2010 on a hazy Sunday morning. Thanks to everyone who made the experience so unique, friendly and enjoyable.

An impromptu podcast post-morning session at Podcamp Toronto guest- contribution by the "cynical bastard" Andrew Currie of openattitude.com being his grumpy self.

Some early reflections on waking up for Podcamp Toronto 2010 and mucking my way around a hotel room to ensure I have everything in order. It's way too early on a Saturday morning for me to be awake. Come and join my specific ring of morning hell. 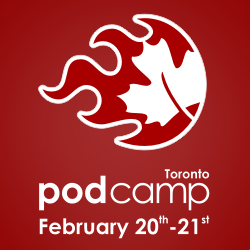 I can be a big time talker and dominate conversation in an environment that I'm familiar and comfortable with, but walking into Podcamp Toronto last year, I found myself listening for almost two days. The practice was not borne out of fear, but a genuine appreciation for having interesting things to listen to. It's a unique experience to place yourself in a room of 100 people (with at least a few similar demographics) and hear where the conversations go as opposed to what one might hear on a corner, on a train, or at a coffee shop.

In listening to the conversations, I may not always feel at home, but at least I speak the language - and the language is strangely comforting.

Having a greater familiarity with some of the members of the community, and having a couple of friends there this year, will probably inspire me to do a whole bunch more talking, which can involve spilling the beans on real life crap that I don't want to spend too much time talking about. Herein lies a key difference between me and many of the people I meet at podcamps. I am a hobbyist and consider all of this stuff fun. I don't have many friends or workmates who share my interests in social media, blogging and podcasting, so when I get to podcamp, being able to discuss such things is like an oasis to me.

So, if you run into me, and I seem hesitant to talk too much about my day job, I'm not being an ass, I'm just trying to escape it for a couple of days.

Much in the same way I record impromptu podcasts while I'm down in Vegas, I'd like to record several brief podcasts over the weekend. My arsenal of tools is actually quite simple; record a Voice Memo on my iPhone, email the m4a file to my Posterous account and voila - instant podcast. Feel free to come back to lovehatethings to hear my audio ramblings from Friday evening until Sunday afternoon.

Somewhere along the way I'll also be meeting fellow DyscultureD podcaster Andrew Currie IRL for the first time, and we'll have to figure out if we can make a live recording of the podcast during the time we're both near a mic.

In as much as there will be much time spent listening to others waxing netiquette, I've decided to thrown my metaphorical hat into the allergorical ring... or something like that. I'm facilitating a session first thing on Saturday morning. I've chosen a title that's sure to scare off many people: "A Brief Discussion on Dante's Inferno". A friend suggested I subtitle it "Not the upcoming video game you literary Morlock", but I refrained.

I hope that in my state of potential hangover-induced haze, there will be much participation or it's going to be a long half hour. With Prezi at the ready and Twitterfall set to go, I'm going to try and Saturday morning entertainment to kickoff people's mornings ala the Hong Kong Phooey and Laff-a-lympics of my youth.

Isn't learning why every comes to Podcamp? Sure there's socializing and doing lunch and drinks and such, but I always come out of these events with a wealth of knowledge that extends beyond the content delivered. The knowledge of the community itself is invigorating. The energy that evolves as Saturday marches on is intoxicating. And the consideration that everyone gives to everyone else is a prime example of the fact that learning does not have to be top-down, that authority is in the hands of the community, and that what you bring to the campsite better be more than a Kellogg's Snack Pack of mini-boxes of cereal and Kraft Marshmallows.

Podcamp Toronto 2010, drop some knowledge on me!