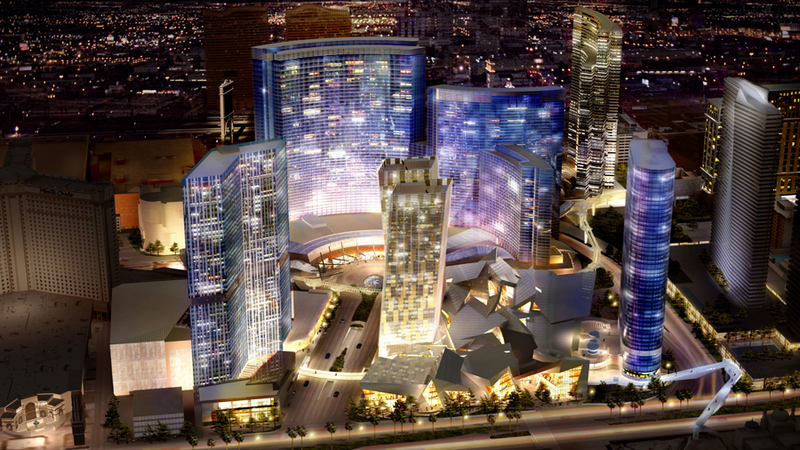 Does it seem hypocritical to believe both sides?
love:
In an economy like this, how refreshing is it that, at least in certain places, persistence of vision and determination have started to indicate that all is not lost. Not allowing the word "quit" into their vocabulary the financial juggernaut behind the City Center project truly embodied the Ray Kinsella inspiration: "If you build it, they will come." With the gala grand opening of the masterful Aria a couple of weeks ago, anyone who had doubted, had those fears allayed.
Aria, and it's neighboring structures, are masterful in design and awe-inspiring to behold. This bold statement of 4,004 new hotel rooms in Sin City will make all of the other hotels claiming to be the "class of The Strip" stand up and take notice. At once modern, classic, and futuristic, Aria will draw in crowds of vacationers and keep them there.
The ambitious inspiration to almost create its own self-enclosed world right on the mid-Strip should have competitor's worrying. Once at the City Center, will gamblers want or need to leave for anything? If there is a project that will challenge the ongoing concern about losing people from your own hotel to other casinos, this is it.
A timeless wonder that will be a shining torch on Las Vegas Blvd. for a long time to come - I cannot wait to see the entire site upon completion.
hate:
Are you kidding?
The economy is in the tank, people are starving and being booted from their houses and a company swoops into Vegas to flaunt money in the faces of those who face desperate times. The concept is abhorrent. The notion is repugnant. Upon the opening of City Center's Aria hotel/casino a couple of weeks ago, Vegas truly gave a big middle finger to everyone suffering under this recession.
Sure, Aria is big, bold and beautiful, but with half the rooms on The Strip sitting empty, even on most weekends, the idea of adding 4000 more seems stupid if not suicidal. There are some tossing around the idea that Aria will have to make $11 million profit EVERY DAY just to stay ahead of growing debt. This from a hotel that has had to reduce early room rates to as low as $129/night. When was the last time a resort opened and within a month had to offer discount nights? Will City City Center become nothing more than fodder for grand merger and acquisition plans five or ten years down the road.
The Casino looks like a night club inside, the big production show is an Elvis Cirque show that had better be about Elvis Costello before I even think about going. You would think the writing should be on the wall in the fact that they had to rush the casino opening to finance the remainder of the project.
A shameless blunder that may be bold, but a scar on Las Vegas' reputation for a long time to come - I will not wait to register some spite and confusion.
P.S. Shit... does this place really look cool both inside and out. It is true that the casino's way too dark for the beauty that lies in the design of these structures. Maybe they aren't done yet and don't want you to look up.
P.P.S. You should all know better than to take anything above seriously. This is lovehatethings after all.