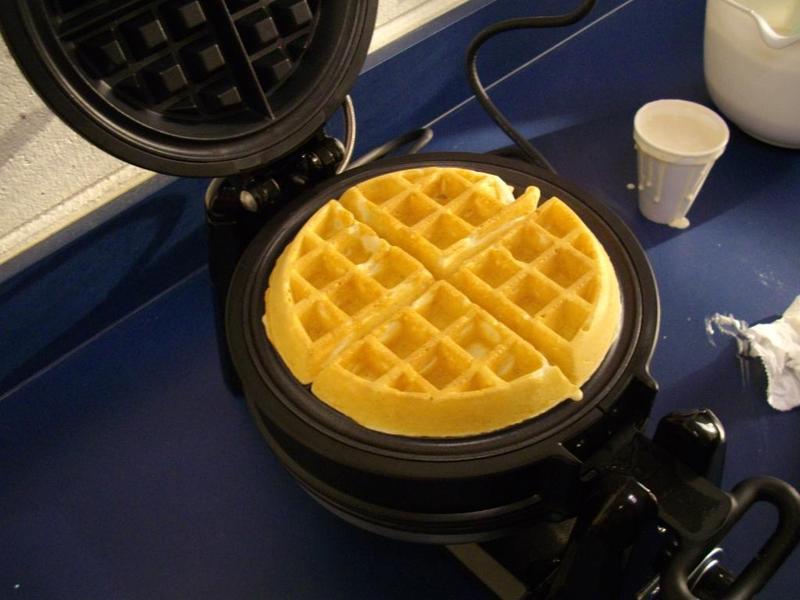 We often turn to each other and snicker upon hearing of the entreprenurial opportunist who sees Jesus in a Ruffle and sells it on eBay. We often split our sides at claims of Christ on a cracker, the Virgin Mary Rice Krispie square, or the incidental rendering DaVinci's Last Supper on a mold formation in month old cottage cheese. The sad truth is, it's quite obvious the person selling the product is not a "true believer". If so, how could these latter-day Merchants at the Temple bring themselves to sell what could very well be akin to the Ark of the Convenant?
Even those that consider themselves religious refuse to get caught up in the divine delectables, the holy hors d'oeuvres, the beatific breakfast sausages that draw so much closing story fodder on nightly newscasts while every "Dan Anchorman" wannabe echoes a couple of light chuckles as they go to the wide shot of the Action 5 News Team enjoying the joke. But someone's not laughing, because, on eBay, people are actually bidding on this stuff.
You may think yourselves above such digestible miracles, but even in your Doubting Thomas ways you may be an active participant in a cult-like subset of the Church of Food.
Are you padding down from every hotel/motel room you've ever stayed in, before you've checked out, showered, or sometimes even dressed, to share in the bounty that is the complimentary hotel breakfast? At what cost in time and effort are you willing to buy-in to the word "FREE" while skittishly glancing around the sunroom to observe those shoving individually-wrapped muffins, sickly bananas, orange juice concentrate, and dishwater coffee down their sullied maws.
People will sacrifice hours of needed sleep and waste up to an hour meandering amidst the soma-like trance fields that are the hotel breakfast nooks. They'll bitterly complain later in the day that their road trip driving sessions are going too late into the night, forgetting the cultural Mecca they participated in that same morning at tiny round bistro tables made cozy by the warm glow and hum of microwave ovens.
But nowhere is this devotion to ritual so evident than people who will line up for hours waiting their turn for the malted Belgian waffle iron to be free. These are people who would never go out and just buy a freakin' Eggo once in a while, but instead shamble wearily in the queue, like breadline comrades in Iron Curtain Warsaw. They mutter obscenities under their breaths at the mother who spends double the necessary time explaining the process to her four year-old while trying to soothe the crying jags at not being able to fill a bowl with a generic Froot Loop substitute and throw them around the room. They secretly wish death upon the doddering senior who has to peer intently to decipher the instructions before calling over a companion to ask them what to do next. They seethe with rage at the person who isn't immediately present at the waffle iron upon the completion of their batter press session - to tired to yell, too polite to open it and steal it, to exasperated at the 38 minutes they've been standing in line while their partner has the kids packed up and is honking the horn outside the window, they grimace and direct elaborate sneers of disdain worthy of someone who molested a child.
This is what we've become. We want our ten cent portion of waffle mix SO BAD that we are willing to waste far more valuable time to attain it. We'll gladly spend $20 extra for a hotel room that doles out $5 worth of high fructose gluten in the morning. We're willing to shave hours off of well-needed sleep to rush down to mingle with the Morlocks so that one day we will be able to tell all our friends how worthwhile an experience our travel breakfasts were. Not that far from the devotion of the eBay divine potato chip purchaser, where they've traded money for a chance at getting closer to their creator, you've traded time to stuff your craw.
In the end, they'll have a chip that looks like Jesus... or more likely the Shmoo, while you'll have a twelve hour window to get to the next motel so that you can befoul the bathroom with what passes as pungent remnants of a "healthy" breakfast, grab a five hour sleep, and be ready to be down in the foyer for 9am the next morning, or at least before the last stale croissant is put away.
In the name of the Fritter, the Bun, and the Whole Wheat Toast, as it was in the beginning, finishes by 9:30am, checkout at noon. Alpen.
P.S. Across Canada on Canada Day, all Mandarin Chinese Buffets served free meals. Nice gesture. Kudos to the owners. And the cult descended:
"The restaurant's first customers for its Canada Day (Wednesday) buffet lined up at 10:30 p.m. Tuesday night, say staff who saw them then and let them in the next morning. Yesterday afternoon, a line of several hundred people wound around the plaza. Many of the 1,600 people who ate there yesterday waited for several hours."
Some people waited overnight, over 12 hours, in a concrete parking lot for a buffet that costs $16.99 - largely middle-class people, forgoing the better part of a day for a free meal.