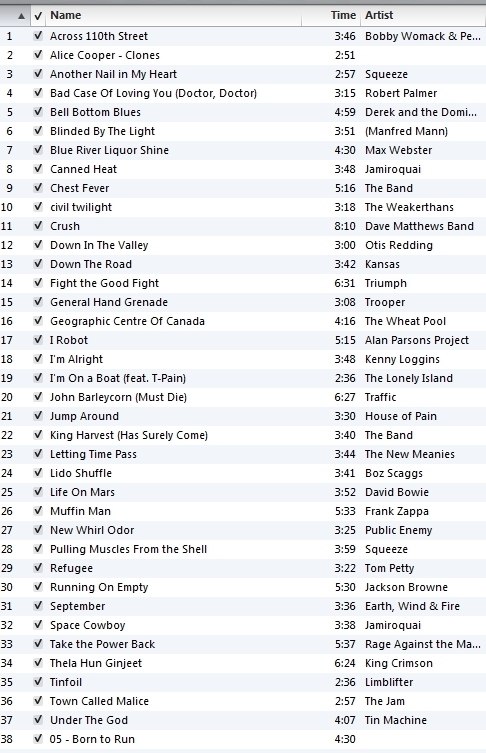 Part Three of a consideration on re-consumption of content through the medium of playlists.

Why Don't We Do It In The Road? - Paul McCartney
Why don't we do it in the road?
An early surface interpretation might suggest McCartney evoking the obvious late 60's "Summer of Love" mentality of free love, anywhere, any time. His push toward the public expression of sexual gratification in the middle of a city street hearkens to a time period of rebellion against taboos around the world. He devolves us to the apes rushing to copulate "helter skelter" on the asphalt thumbing their nose at older generations who strut around like roosters in tuxedos... with bow ties... drinking single malt.
Why don't we do it in the road?
By repeating the earlier sentiment, one could think McCartney is making us really question the element of the pronoun "we". We assume that McCartney means himself and a lover, but considering the social unrest occurring throughout the western world during this time period, it's highly likely that, in fact, the "we" refers to the group of disenfranchised youth that exercised civil liberties by hitting the streets with placards and chants. It is a call to arms against the military-industrial complex that funded the Vietnam war and sent young people to their deaths while profiteering on death.
Why don't we do it in the road?
In the third proclamation of the title line, the walrus recalls the focus on the word "it" as we realize that perhaps our assumption of the copulation expected in line one was perhaps a bit simplistic in interpretation. We realize that it could be anything. The operative part of the sentence comes later in the revelation that no matter what "it" is, "it" should be done in plain sight. The conveyance of the action (2it) to the road reveals a relatively simple mathematic formula that helps to define the logic of the lyric. To put it simply (Y - [I + U] + 2it) / C200H246N2S7O4.
Why don't we do it in the road?
Only by the fourth repetition do we realize the true pain and suffering behind the artist's vision. Echoing the repetition of Eliot at the end of Hollow Men, McCartney goes to a fourth step that reveals his intention.
The final question in the WDWDIITR puzzle lies in the "in". The preposition has been a long time misnomer. Does McCartney mean "in" or "on". We normally say phrases like "out in the street", but does this mean we are consumed or buried in the asphalt? Does Sir Paul indicate that we are up to our necks in road and can only rise up by doing it? Are we drowning in the road? It would be easy for McCartney to say "on" the road, but would that really convey the true sentiment of his tortured soul that, at this point, was being swallowed by the Beatles to the point that he essentially recorded this song entirely by himself overnight on October 9th, 1968. McCartney feels dragged down by the rest of the band and stuck in the gooey asphalt that is restricting his creativity. The line is meant to be ironic. Instead of saying "Why don't we just all restrict our creativity and bog each other down?", he instead asks the title line.
No one will be watching us.
McCartney develops the continuing theme of the popular juggernaut that was The Beatles by waxing satiric on the legions of the band's followers. They buried themselves in studios, tried to run to India, ran off in different directions, but still remained more popular than ever. Gaggles of girls waited outside of every door. Television and newspaper reporters waited around every turn. There is no small sadness in the fact that McCartney only feels that his only chance of escaping prying eyes would be in blatant public view. Unfortunately, even an attempt at this strategy didn't work a scant year or so later when The Beatles climbed up on a roof top and the cameras still followed.
Why don't we do it in the road?
Resigned to his fate of never being able to escape the pressures of being in the most popular band in the world, McCartney presages the angst-ridden singer-songwriters of the 1990s and 2000s by contemplating suicide. He wants the entire band and all their fans to join him in a suicide pact while awaiting an oncoming vehicle to run them all over. I know that some of you may think this a bit far-fetched, but I call your attention to the Abbey Road album cover from less than a year later. The fab four lined up like carnival game targets just waiting for a speeding lorry to end "it" all. 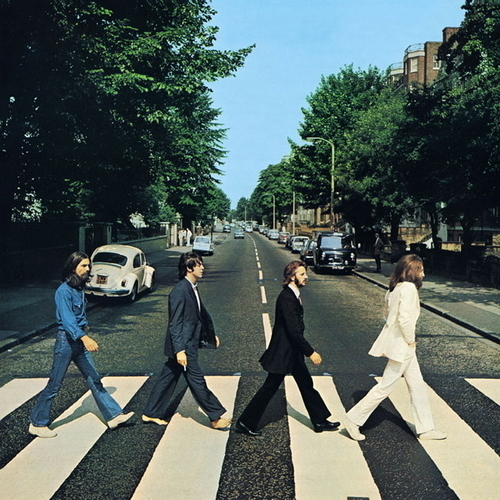