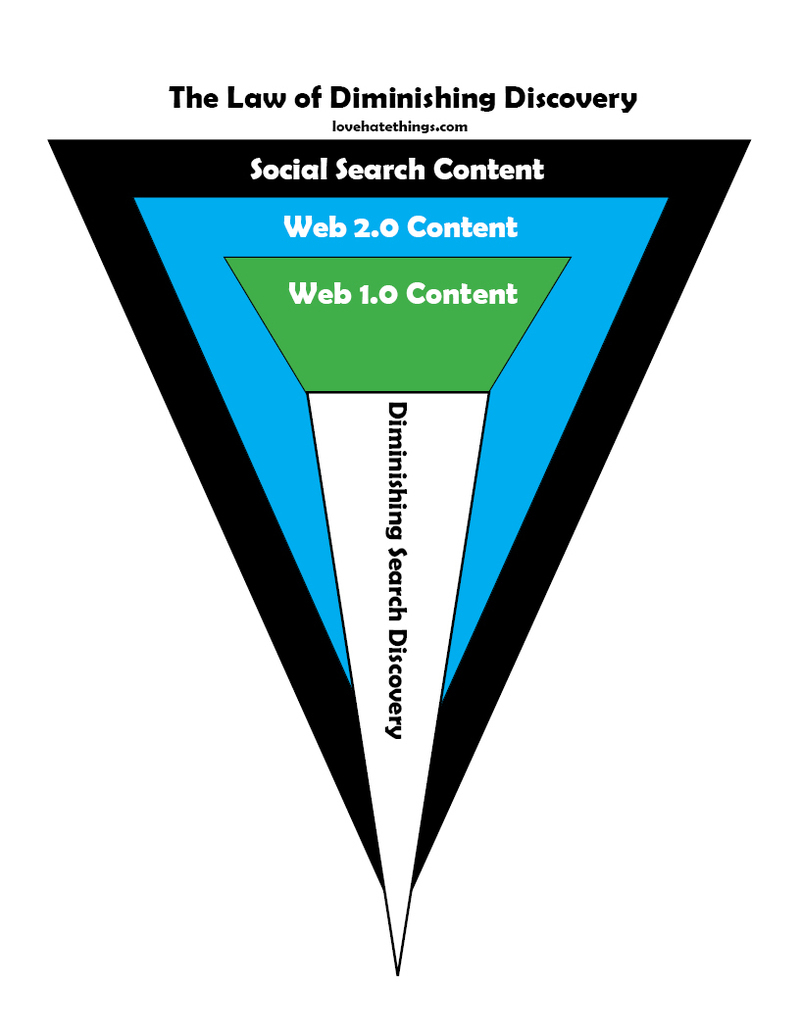 Ask not for whom the bell tolls; it tolls for Serendipity.

While I've posted on a similar topic before, I found last week's announcements regarding Google's social search and Bing's full pipe search of Twitter and Facebook APIs cool, yet, at the same time, also a bit disconcerting.

In as much as one the greatest downfalls of early search algorithms was the assault of flotsam that was returned with every query, it is precisely an aspect of that muddled result that I fear losing. A great characteristic of the early graphic web was serendipity.
We're talking Web 1.0 here. It was a time before the great permeation of referral engines and aggregators, when a reader had to scour through fathoms of muck and mire NOT to find something good, but often just to find something of interest. If it was good, that was an added bonus.
There were regular occurrences of finding fantastic useful and interesting stuff, that enabled you to expand your horizons and knowledge, which had nothing to do with your original search term. Such is one of the great benefits of raw research; you don't only hope to find what you're looking for, you hope to find a whole bunch of other bizarre, eclectic, and brilliant knowledge as well. Click this webpage randomizer link five times and tell me that, by the end, you haven't learned something.
When Social Network algorithms become integrated into your average Google or Bing query, your results will be throttled tighter than they ever have before. And I'll be the first to acknowledge that's probably what most people want. We love the idea of not having to wade through the morass of Web 1.0 where it sometimes took hours to find what we wanted. We lust after authority-based aggregation and recommendations that will point us in the right direction so that the content-drenched world of Web 2.0 won't swallow us whole.
There is a little part of me, however, that enjoyed the search and the discovery that went along with it. There is a piece of my brain that expanded by being forced to make connections in wondering why, when I queried one term, would I get a result that included this specific link. Don't we all have a small part of our brain that yearns for the open road, not caring where we're going or how we get there; productivity be damned! Don't we wish that upon being asked "where you goin'", we could just say "not here"?
One of the things I love doing is going to a site like StumbleUpon and doing random "stumbles". But, even then, they aren't completely random. They are a subset of the users of service, who, by themselves, are a generally pretty savvy group of web users. It is still fun nonetheless.
The search tools are necessary. There are plenty of times that I need to really find something, and swimming around in the trillions of bits and bytes of information trying to find one piece would be useless and foolhardy. It's the evolving pattern that is beginning to scare me a bit. The pattern dictates that as information multiplies, search results become more focused.
When static web pages ruled, results were more widely varied, partially due to the fact that web communities were less automatic and SEO was above the head of the average Geocities or Lycos user.
When social networks emerged and blogging ballooned, subjective content resulted an exponential explosion that threatened to muddy up you average search, but, conveniently enough, technology allowed the results to get even better. SEO, easy tagging, and a more educated internet-savvy content creator was being bred, and we found what we needed easier.
As "social search" and like-minded approaches start to filter into user habits, every search will now pass through yet another filter, distilling the purest result to the end user. This is great for answers. This is a boon to productivity. This is what everyone wants when they search for something. This is what I want when I search for something. But has serendipity died online? Does filtering a search through ever-increasingly effective algorithms which factor in popularity, and adding a filter of authority based on a list of people I have on Facebook or Twitter allow me to expand my horizons or does it effectively quash them.
If you walked into a bookstore and in the first room there was only one shelf with "Books You Will Like", would you be tempted to forage beyond the curtain at the back of store to see what's being hidden?
Maybe it's just the adventurer in me, but sometimes I like the open road, even with the occasional undercooked Stuckey's chicken and glaring billboards for adult stores and firework warehouses.