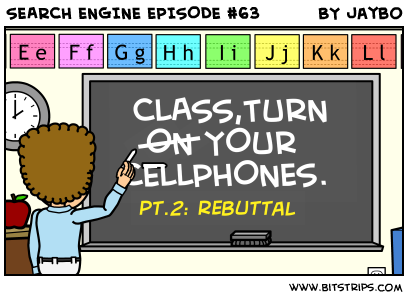 I am waxing educational on this week's Search Engine podcast on TVO.org. The host, Jesse Brown spoke with another Ontario teacher a couple of weeks ago about all of the benefits of smartphones in the classroom. I audio commented a more cautionary tale, and thus the episode was born.

Most excellently the podcast is offered under a Creative Commons license and, thus, I alternately serve it up here at lovehatethings.

Thanks to Jesse for being such a gracious podhost.

A great little three minute video clip by Jesse Brown, whose "Search Engine" podcast, now hosted at TVO.org, talks about such things on a weekly basis. Had the pleasure of interviewing Jesse for my DyscultureD podcast several months ago. He really has his finger on the pulse of where the net and old models collide. Check it out!

Okay, if you weren't from Canada (and specifically Ontario) you may have never seen the Polka Dot Door while growing up. And, if you never saw the Polka Dot Door, you never saw Polkaroo. Polkaroo was one of the best legal trips one could have as a kid. Always a bit surreal and bit insane, the Polkaroo could express a million thoughts with any number of well-placed instances of the ubiquitous "Polkaroo".

Take the three minute trip of this video clip, or, to translate: "Polkaroo? Polkaroo!"

Sometimes stream of consciousness is the order of the day tripper from the heights of sanity to the bend around the Credence Clearwater Revival churchgoing folk never thought well of the young buck from Arkansas but soon found with a little bit of grooming he could become the astronaut we always thought he could be.

Signs pointed west, but signs will often do that when black is orange and orange is grape and there aren’t enough hostess potato chip bags in the world that could be simultaneously crinkled to quash the din of the baby crying in the booth across the restaurant.

Maybe if there was a time and a place the place could be venus and the time could be swiss and we’d chat gaily of the wandering secret agent who lost her memory amidst the culmination of a black box mission set down by the powers that be for the defence of the people by the people for the people made of people – soylent green.

So I ask you young psychotic blithering tattletale of the night – are you up to the call of the man in the pink suspenders and crying behind curtain number two the 86 year-old Monty Hall fan who sits in Beckett-like fashion waiting for a deal to be made and an appearance to be imminent and an autograph book to be signed somewhere between Bob Eubanks and Chuck Woollery.

I remember the days of wine and hosers when men were men and women were lite brite illusions on the battlefield of playtime when the vast ocean of meandering opened up its arms and said “Give it to me straight Doctor. I can take it,” without a second glance or thought or premonition about the forces at work or the elements at play.

Oh sure, you may weep for the downtrodden with your tears made of copper and your heart made of glass and your Debbie Harry affections with consummate incredulity. You may weep for the death of the bison and the culmination of the cataclysm of the crisis of the caucus of the collapse of the cacophony of the Cucumber Club.

Why have you forsaken us?