The Prisoner was hands-down one of the best television shows of all time... and it only lasted 17 episodes. Don't ever think that quantity equals quality. Sure, the look is a bit stylized and kitsch by today's standards, but the thematic interplay and character development set this show apart. If you have a chance to purchase the box set of the series (which can be found for relatively cheap prices these days) or borrow them off a friend... or go torrent diving... check it out. And, above all, give it a chance past the first 10 minutes when it sometimes freaks people out due to sheer weirdness. "Who is Number One?"

How my obsession with collecting prompts my advocacy for the cloud.

It's becoming clearly evident that the older I get, the more willing I am to accept the unusual in the art that I view, listen to, or otherwise consume. Actually, I'm hoping for unusual these days. It's with this view that I revel in the unexpected. From Samuel L. Jackson "biting it" in Deep Blue Sea to the school bus take out in Mean Girls, I almost want to get up and cheer when the truly unique happens. And sure, I'll admit that just going weird for its own sake can come across as contrived, and going persistently weird for its own sake gives you the name of David Lynch.

One of the things I've hated for years was songs that fade out. That artists can persistently allow producers to rob them of the ability to find creative endings to songs is deplorable. I get the fact that being "radio-friendly" demands a no-nonsense way for even the most inattentive DJs to figure out when to start turntable number two, but the fade is quite simply the most uninventive and banal way to finish a song. I'll concede that there may be rare times that a fade can be used as a thematic device, but certainly not on 90% of every song recorded since the 50s. In fact, the first recorded fade was used in "Neptune, part of the orchestral suite, The Planets, by Gustav Holst.  Holst stipulate[d] that the women's choruses [were] "to be placed in an adjoining room, the door of which [was] to be left open until the last bar of the piece, when it [was] to be slowly and silently closed", and that the final bar (scored for choruses alone) [was] to be repeated until the sound [was] lost in the distance." Apparently the thought of the fade didn't cross Holst's mind as a way to provide a smooth segue into the Eye in the Sky traffic report during afternoon drive time.

But there's a strange corollary for every song that I wish could be wrapped up and finished, and for every photograph and painting that has neither beginning nor end, and every television show or series that ends unsatisfyingly derivative. I want the musician to complete the thought, even though the ending may be abrupt or odd. I want the director and screenwriter to complete a vision that suits theirs and not my sensibility. No one questions the painter for taking a slice of life and allowing the viewer to interpret the story before and after. So why does mainstream "art" have to be wrapped up in a neat little packages to be acceptable. Must we demand from our art and entertainment a sense of completion that does away with the snippet of real life that film or television represents?

Beckett explored the the existential reaches of redundancy with Waiting for Godot and is celebrated 50 years later. Joyce completed an esoteric wraparound in Finnegan's Wake with a final sentence that "riverran" flawlessly into the opening sentence. Bob Ezrin contructed Pink Floyd's The Wall with a soft voice that began the disc with "...we came in?" and finished it with "Isn't this where...." The Coen's adaptation of No Country for Old Men had a brilliant understated conclusion that surely pissed some people off, but in its open-ending was more satisfying and thematically-pleasing than any contrivance that might have made for a happy audience.

After all, such neat little wrap-ups are the essence of Shakespearean comedy and children's stories. The evil get screwed, the good get rewarded, the fools get their ass kicked and run away, and the true lovers get married. Beyond this genre, I fail to see why we should have any right to expect any specific ending for a story or a song. The concept of poetic justice has trained our collective media minds to expect the bad to get punished, the good to triumph and all loose ends to be wrapped up - but this is not reflective of life. If art is supposed to be a reflection of life, let's allow for art to include the strange, the bizarre, the unexpected, the flawed and the needlessly tragic. If we can't find beauty in representations of ALL aspects of life, we are shortchanging ourselves some of the greatest stories that can be told... or, more realistically, that can be bankrolled in order to be told.

The new Star Trek trailer... what can I say? Be there or be in a galaxy far, far away... wait, that's the other one. Live long and prosper!

Okay, I'm showing my age a bit here, but I remember Paul Lynde from the center Hollywood Square for many years. I also remember him as getting way too many laughs for jokes I didn't understand as a very young child. That said, in reading some of his best lines in retrospect, either this guy, the writers, or a combination of both were comical wizards when it came to one-liners and double entendres. Often set up by Peter Marshall 's questions, I now get why Lynde was so loved for so many year.

As a side note, I always thought the voice for Roger the Alien on American Dad was a dead ringer for Lynde... kudos Seth. Here are some of my Paul Lynde favorites:

Peter Marshall: In "Alice in Wonderland", who kept crying "I'm late, I'm late?"
Paul Lynde: Alice, and her mother is sick about it.

Certainly not two of the common group of muppets, but I always remember these two rather surreal pieces of the extended family of Jim Henson: 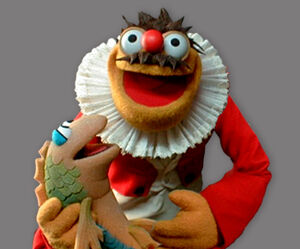 If you used to love TV shows that actually has themes when you were growing up, this lovehate's for you. I refer you to televisiontunes.com if you've got a hankerin' for a theme you haven't heard in a while (they stream over 7000 of them!).